On Thursday, 6th September 2012, A press event organized by Amazon. In this Event Amazon CEO has introduced three new Tablets to users. Lets have an overview on Plus & minus of new Amazon kindle Fire Tablets. 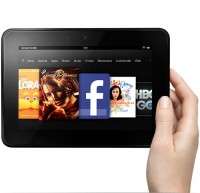 Plus points of New Amazon Tablets:-

Overall conclusion is that these tablets are better performing than previous tablet versions. Previously Amazon has minus points like as No slim design, Screen Quality, Low Performance during work on tablet. The new device has come with improvement to make it slim, Super screen & High performing in run time. We can say its an upgrade to Amazon Kindle Fire tablets for better performance. Let us know in below comments what you say about Amazon Kindle Fire HD Tablets.