Google has introduced its first 7 inch tablet named Nexus 7. This 7-inch screen tablet have IPS display with 1280-by-800 high-resolution display protected by scratch resistant Corning® glass. It contains over one million pixels, text is sharper. Watch HD movies on your 7-inch tablet or play Games with high graphic. Nexus 7 looks like Amazon Kindle fire in size and price also is similar. 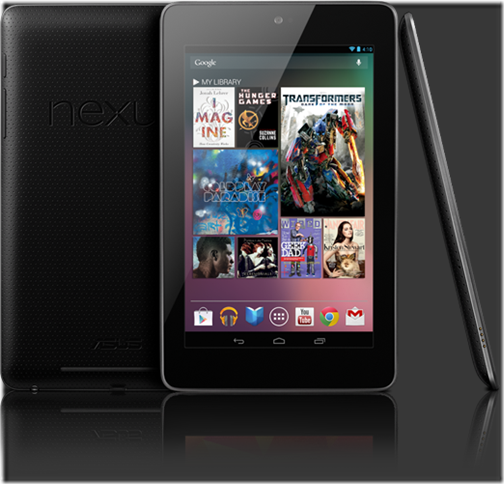 This device is available in two models as 8GB is priced at $199 and 16 GB at $249. Within purchase you will get $25 credit for spending on Google Play.

Nexus 7 is powered by NVIDIA® Tegra® 3 quad-core processor, it will load web pages quickly, play games smoothly and switch between apps quickly for multitasking.  A 12‐core GPU delivers rich and immersive graphics while patented 4-PLUS-1(tm) CPU design gives you processing power when you need it, and battery saving efficiency when you don’t.

Nexus 7 will come with Google Chrome pre-installed, Google Chrome is really very fast browser as I used its beta version on my Galaxy Note so it will provide amazing browsing experience on Nexus 7.

So go for Google Nexus 7 Tablet  because it is most advanced Tablet in Android. Another good thing about Nexus 7 is about price it is cheaper like Amazon Kindle fire. It will be available in USA, UK, Canada in mid of July 2012.