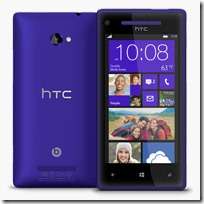 The HTC WP 8X is powered by Qualcomm® S4 1.5 GHz, Dual-core processor and 1GB of RAM, so it will work faster and easier on windows phone 8 OS platform (Dual core processor working faster on iOS and Android devices). By reviewing a lot of reviews it come to know that it will perform better.

The HTC Windows Phone 8X is new Smartphone with Microsoft’s newest improved Windows 8 Phone Mobile OS. The Metro UI has tiles which contains apps shortcut on start screen. You can adjust start screen tiles as you want, change size larger or smaller according your desire. This new OS designed to run applications developed for windows 8 RT (desktops and laptops) .In Windows Phone 8 OS same programming code can be used in  windows 8 pro.  The Windows Phone 8 is new Smartphone OS so it will take time to avail apps on windows app store.

The HTC WP 8X has 4.3-inch touchscreen with 1280×720 pixel resolution which results highest density of any Smartphone – like iPhone, and Galaxy SIII Smartphone, But The HTC 8X is unable to maintain sharpness, colours, black levels and viewing angles like iPhone and Galaxy sIII. Anyway it was good effort for a Windows Phone 8 OS powered Smartphone.

The HTC WP 8X haven’t  battery cover it means you are unable to carry extra battery as backup source. The 1800 mAh unit inside battery which can be replaced by manufacture’s service center. The battery backup is – 10 hours for talktime, 5-6 hours for web browsing, and 6 hours  for video playback. The battery backup is lower in comparison of Galaxy SIII, Galaxy Note 2, and iPhone 5.

If you are windows lover then this phone is good for you and you should surely by this.