If you are big fan of any TV serial or Show then here is good news for you. Youtube India website launched TV episodes on YouTube Shows.  So Now Watch Indian TV Shows on Youtube Anytime Using Internet in your spare time.

Now you don’t worry about missing episode of your favorite TV show. The company claims to offer more than 19,000 full episodes of 300 programs in six different languages (Hindi, Tamil, Telugu, Bengali, Gujarati, and Punjabi). Over the last few years, major Indian broadcasters such as Sony Entertainment Television, Colors, ImagineTV, Star India, and VikatanTV have been bringing their shows to YouTube so that you can watch them whenever you want.

While these shows have been available on the respective YouTube channels for quite a while, YouTube announced that it has now revamped its Shows page for Indian viewers, to create a single video destination for users to follow their favorite television shows and discover new shows. As for the rest of world viewers, these television shows will be available at youtube.com/shows/other-languages. 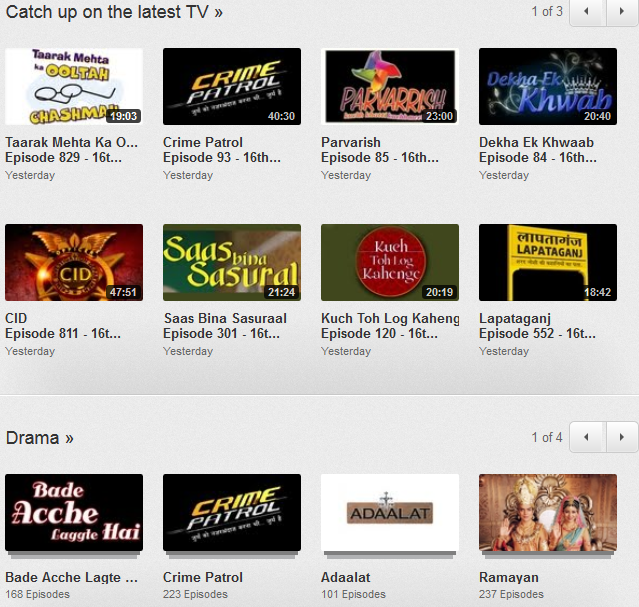 As an aside, one thing worth nothing is the prominence of the television channels Colors and SET in this video hub. Along with the top episodes, there is an option to view only the top viewed episodes from Colors and SET and in the popup menu, there is an option to view shows only from this channel. Some of the example shows being offered are Mahabharat,  Ramayan,  CID,  Devon Ke Dev Mahadev,  Taarak Mehta Ka Ooltah Chashmah  and Thendral. And the collection isn’t just limited to saas-bahu dramas. You will also find comedy shows, classics – like the original Ramayana and Mahabharata – and the “scripted” reality shows.

Also, all these TV shows are available as YouTube channels that one can subscribe to and YouTube will send email notifications as and when new episodes are uploaded to these channel.