Are you confused what type storage to choose for new or old Computer, HDD or SSD (Solid-State-Drive)?  SSD storage is being popular in these days. Many computer users prefer to buy SSD instead of HDD (Hard Disk Drive). Here we will analyse speed performance of both (Hard Disk Drive and Solid-State-Drive).  This guide will help you finding which is best for your needs, what is best and my final verdict. 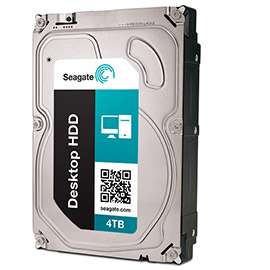 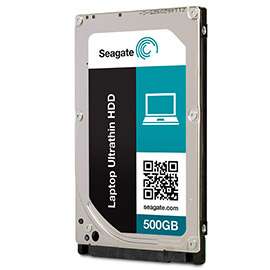 Hard Disk Drives are most popular storage because HDD is cheapest mass storage device, there is no other efficient  device available in market, so it is best. Here we will analyse speed of Read/Write of Hard disk. A Hard Disk can transfer data at max 140MB/s, However HDD data speed depends on disk RPM as 5400 RPM HDD write data at speed of 77 and 76MB per second and 7200 RPM HDD write at speed of 100 and 98MB. It is slower when multiple read/write done as it takes time (latency or Seek time) to move head on data sectors.   Below is screenshot of Hitachi HDD showing 65Mb/s read and 48MB/s Write speed. 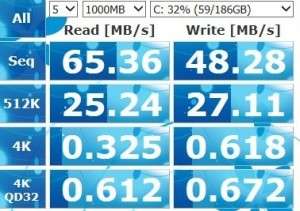 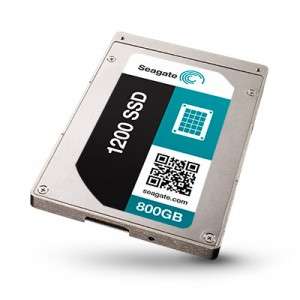 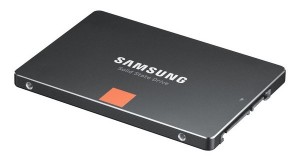 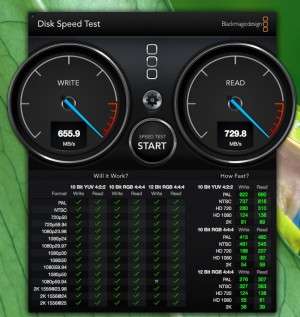 SSD has more performance in read/write speed. Above screenshot showing read speed of up to 655MB/s and write up to 729 MB/s on macbook pro 250GB SSD. It is amazing speed 5-6 times more than HDD speed. In this speed 250GB data transfer will take max 390 seconds (Approx. 7 Minutes). This test is performed on SSD to SSD data transfer because HDD max read speed is 140MB/s which is 3-4 times lower than SSD write speed. Same 250GB data transferring to HDD will take 35-40 minutes or more . So final conclusion is that SSD wins in read/write speed and far ahead from HDD.

Note: SSD speed may be lower by manufacture, see manufacture details if you looking to buy.

SSD Power Consumption is half to a third instead of HDD, SSD don’t have mechanical  parts. The lowest-power HDD (1.8-inch size) can use as little as 0.35 watts, 2.5-inch drives use 2 to 5 watts and 3.5-inch drives can use 20 watts. Hard disk power consumption is higher than SSD. However DRAM SSDs uses similar power as HDD and requires to be connected to power after system shutdown.

No Defragmentation needed for SSD as it has low latency (Seek time) but Hard Disk Drive requires disk defragmentation for optimal response time to access data.

SSDs has 500GB common and maximum 2TB storage capacity which are too expansive  and still rarely available. If you needed  more than 2TB( 2TB SSD is too expansive),  it will best option to choose HDD (SSDs available up to 2TB but too costly).

No noise with SSDs but HDDs do noise as they use mechanical parts.

Data on SSD is more secure rather than HDD, SSD is newer technology it has one disadvantage,  it costs higher than hard drives.

SSD contains NAND cells so it have limited cycles of read/write but don’t worry you can read/write approx 250GB data per day on a 250GB SSD for 10 years (Read manufacture specifications of SSD for more about this). It limits writing cycles so that no loss of data, it is as safe as HDD.

In my opinion SSDs are too good to use if budget doesn’t matter for you. SSD increases read/write performance of computer. Hence computer programs loads 3x faster than HDD. For example – Loading Adobe Photoshop components from Hard Drives takes time, shows loading components but when i open it on SSD loads faster. If budget don’t matter go for it. If you have any questions you can ask me in comments.

One thought on “SSD vs HDD Comparison of Speed, Performance and durability”